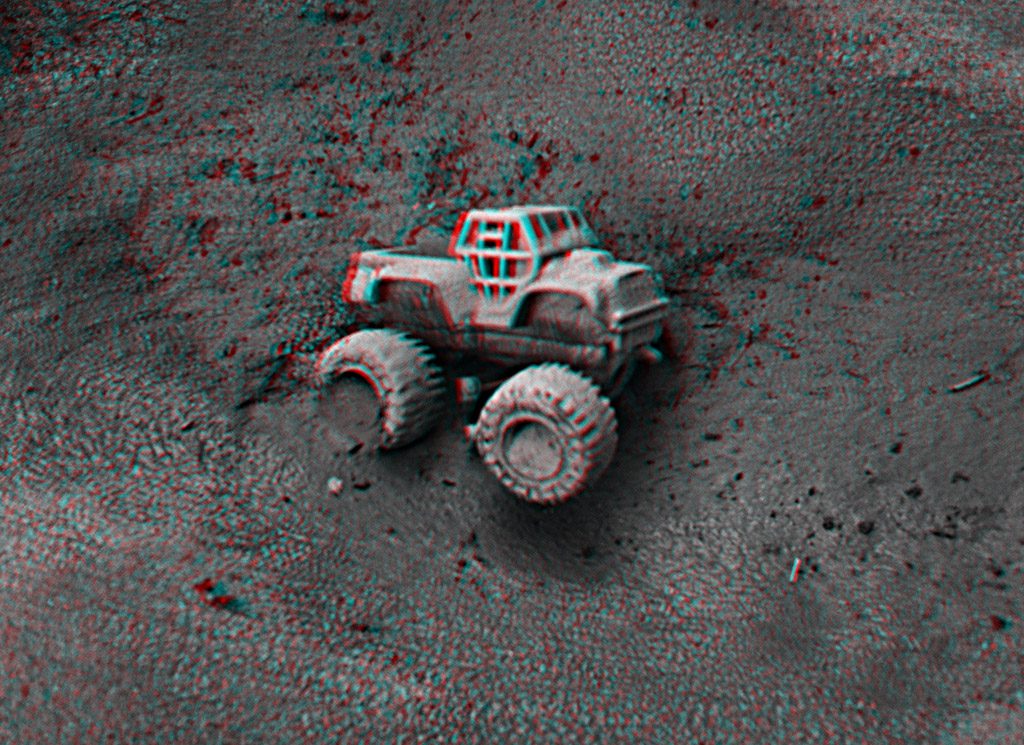 Probably one of the oldest methods of viewing stereo 3D content is Anaglyph.  Invented in the 1850’s by Frenchmen Joseph D’Almeida and Louis Du Hauron, it has seen little update over the years, other than varying the color of the lenses (mostly as an attempt to deliver better full-color images).  It is a very cost effective format, but most experts in 3D scoff at it, as a stereo presentation with polarized, or active shutter glasses produces a better result.  Anaglyph is steampunk industrial-age technology after all, and we are in the digital age.  It might surprise many readers that anaglyph is still used for anything, but it is the lynchpin of many 3D productions these days.

Stereo 3D content can be confusing.  It is not an exact replica of human vision, and often we mistake any object in 3D space to be a good thing, even if the image is damaged in some way (I saw an entire movie in India projected with left and right eye flopped, and only I noticed).  Stereo visual effects are hard, and stereo conversion is a conundrum of perspective that is often misinterpreted.   To overcome this as much as possible, it is necessary for a stereo production to view the images in as many 3D methods as possible.

If you enter most facilities working on stereo VFX or conversion,  you will see that they likely have  expensive 3D monitors that are color balanced to perfection, and screening rooms available to view content; where they spend hours picking over each shot.  The reason for so many viewing stations is that whether you are free-viewing the stereo, or looking at it on a 40 foot screen at 14 foot lamberts, you never get the same image twice, and it gets expensive to constantly run most screening rooms or theaters.  Errors make it through despite all this redundant work, as everyone has an opinion of what is wrong, and not everyone is identifying the same problem.

To align the stereo vision, the production hires a stereographer.  It is their job, and that of any co-supervisors, to identify the problems in stereo imagery, and give concise direction to the team leaders at the various facilities.  In conjunction with the director, this individual designs the 3D experience, and oftentimes sits in a screening room all their own.  This is a nice ideal situation.

Let’s add another wrinkle.  Now the visual effects and stereo conversion teams are all over the world, and soon the production is stretched across several time zones, and half a dozen languages.  Most hotels where any of the supervisory team may be do not have 3D monitors available, poor internet connection, and 3D viewing systems in different countries can be literally all over the map (much as your team members are).  An XpanD presentation in France will not necessarily look the same as a Dolby system in Hollywood, and all this time the supervisors are stuck in an airport lounge in Frankfurt on a conference call trying to understand the notes, or a Skype call at 3:00am with the other side of the planet at their breakfast table.  You can hopefully see the issue.

What is needed is an A) portable and affordable 3D viewing system that can B) handle specific modification to tear apart the minute problems without the expense of a theater, and C) communicate directions to teams around the world in a language they understand.  A system you can work with at 20,000 feet above sea level while flying 500mph over the North Pole.  Much like a joke that goes around about the American and Russian space programs (the USA spends $1.5 million inventing a pen that writes upside-down in space, and the Russians just invent the pencil*), lets look at simple methods to solve a problem, and modify the existing 1850 Anaglyph system.

Anaglyph to the Rescue

Let’s see how the anaglyph system answers the first condition:

1.  Let’s start with this simple observation: as stereographers for live action, conversion, or VFX we do not initially care about color.  A color film with bad 3D is not acceptable, but the reverse of that situation is more so.  The interesting thing about a stereo film is that we do not require color to identify a stereo space.  Color is more useful to our eyes to identify different materials, and shading to identify form, but depth perception like perspective is intuitive even at low luminance levels; where our eyes only see black and white.  Color is often confusing, and throws-off depth perception.

2. Anaglyph is portable, and we can see it on a desktop computer, laptop computer, iPad, iPhone, Android, or piece of paper.  All you need is a pair of easily obtained cardboard glasses.  You can zoom in to it, look at individual color channels, and email it to your colleagues.

3.  Anaglyph is small and efficient.  It is easy to send digitally, and requires one file to transmit both sets of images.  In a limited bandwidth environment, with a nearly maxed-out data plan that might be the best thing you could ever have.  Furthermore, since both image sets are available, it is faster to send the image across the seas, split it apart to left and right eyes, and throw it up on your projector.  While the reasonably compressed black-and-white images are being evaluated, the multiple gigabyte files move slowly across the world on a fiber connection, or Boeing 747.  Efficiency is often the exact thing you need.

Anaglyph has a few drawbacks.  First is that is not well-suited in its initial form for standard television NTSC color space.  A computer monitor is better, as it reproduces more colors.  Secondly, Quicktime movies are compressed.  Do your research as to which compressor works the best for your purposes (avoid the Animation codec as it is too large to email).  Some codecs actually introduce cross-talk into the other color channels, destroying the stereo illusion.  Third, some colors do not reduce to Black and White luminance well.  Consider using other color reductions such as lightness, or individual color channels.  Lastly, your color vision will be skewed for about 10-minutes afterward.  Flip your glasses backward for 30 seconds to speed up your internal white-balance.

Which color Anaglyph to use?

The best choice of color filters to use for Anaglyph viewing is generally red-cyan.  This mixture provides a similar amount of luminance to each eye so the image does not take on a specific color cast — which normally our brains compensate for.  In the next post on this subject, we will explain why, but it is wise to keep a red-blue and a red-green pair around as well.

Not all Anaglyph glasses are created equal.  American Paper Optics sells properly manufactured, distortion free cardboard sets that can be customized.  Contact them for a sample pack.  I am generally unimpressed with the more fashionable plastic lenses, as they often have bad optical properties.  It is hard enough to discern stereo issues without added distortion from cheap glasses.

All right.  Cardboard glasses in hand, we will venture forth.