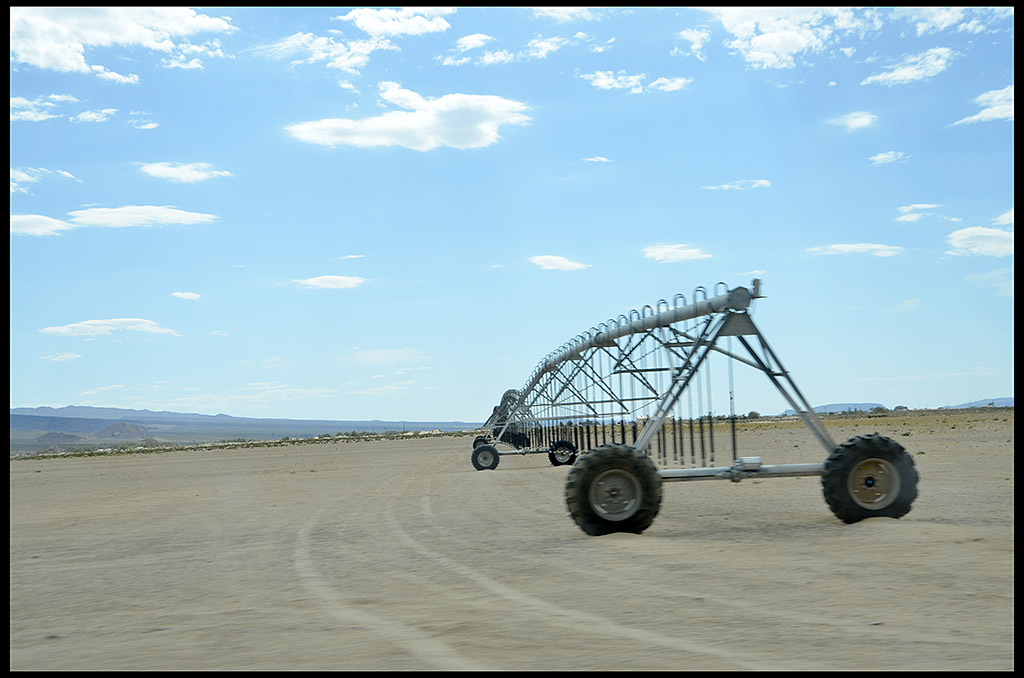 There is little to no rain in California. For the last several years the once verdant fields of this great American state (both in size and productivity) have produced fewer crops as water restrictions expand every year. Los Angeles, is a desert, and has always imported more water than actually flows there to survive. Weather conditions fluctuate, as they have throughout history, and the ebb and flow of high pressure has kept the rain clouds away.

Occasionally, when there is rain, it comes in torrents, and quickly over-saturates the ground which cannot recover from it’s dry condition enough to absorb the needed resource. The topsoil gets moist, grass begins to grow, and soon dies again, since all the water it needed flowed out to the ocean. California relies on water that has fallen in times past, stored in man made reservoirs, but because of the lack of rain, the water restrictions mentioned earlier, are by necessity turning the California landscape brown.

The reservoir and irrigation system were set up in the state over half a century ago, by people who looked forward to the future. They sought to set up systems and procedures that would sustain growth of California’s population, economy, and crops — through proper management of existing resources. In times of emergency, there were agreements set up with other states to purchase the water for a short amount of time, until the reservoirs could be reconstituted. 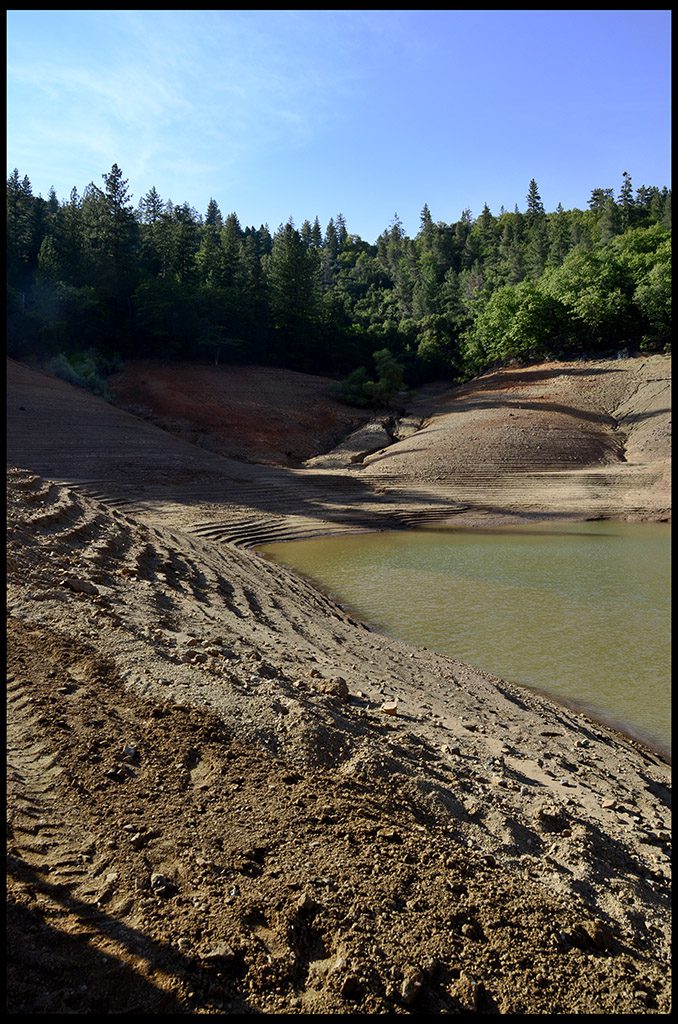 Traveling all over the state, I have seen the reservoirs current condition. Many lakes are still filled, but the most-used reservoirs in Northern California are down 100 feet from their top level, and environmental restrictions have starved the Central Valley of California of water flowing in from a northern delta. Giant fields gone fallow, and dust blowing across once verdant lands is now the reality it faces. Farm work is literally drying up, and like the Dust Bowl in the Oklahoma area 80 years ago, people are migrating to other states to take on work, as they are literally awash with abundant rain, crops, hunting, and work that California usually claims.

In an almost direct reversal of the dust bowl, people are flocking to Texas and the panhandle area. The economy is booming, and Ma Jode has packed the family car for greener pastures. Migration from other countries also pours into Texas, and citizens are standing next to government forces to deal with the influx of people — much as they did in the 1930’s in California (As documented in novels like The Grapes of Wrath). It is like a bad Hollywood sequel, merely take the same conditions, and reverse them. 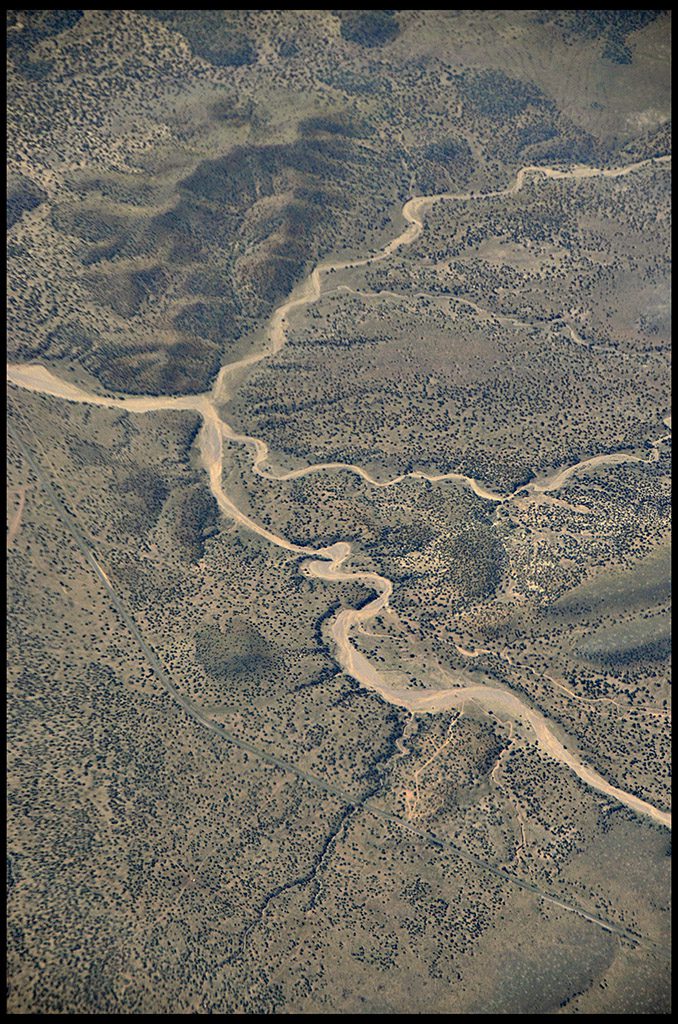 There is little to no VFX work in California, either. For the last several years the once plentiful VFX facilities of this great American state (both in size and productivity) produce less of the imagery seen on the motion picture screens, as subsidies from other states, and especially foreign countries expand every year. Los Angeles, is a desert, and has always imported more VFX talent than actually grows there to survive, and it is now flowing away. Business conditions fluctuate, as they have throughout history, and the ebb and flow of high tax incentives has moved motion picture production to other shores.

Occasionally, when there is work, it comes in torrents, and quickly over-saturates the capacity of vfx houses which cannot hire and train fast enough to absorb the needed work. The workers are hired in a mad dash, the bottom line begins to grow, and soon evaporates again, since all the work the facility needed was temporary, and has flowed over the border. VfX houses rely on revenue stored in the bank for difficult times, but because of the lack of work those reserves are dwindling. The subsidies mentioned earlier are turning the California VFX landscape brown.

The VFX houses were set up in the state over half a century ago to feed the movie business, by people who looked forward to the future, and developed the technology to make the impossible an every day occurance. They sought to set up systems and procedures that would sustain growth of California’s VFX community, economy, and workload — through proper management of existing resources, and training in trade schools. In times of emergency, they would share their work with one another to make a motion picture on a short schedule, until the bank accounts could be reconstituted, and trained employees carried through.

Traveling all over the state, I have seen the current condition of VFX. Some coffers are still filled, but the small facilities in California are down from their top level, and paralysis in government to deal with laws governing foreign subsidies are drying up jobs. Once reliable facilities are shut down on the verge of their ultimate success, and companies are out of business by the dozens every year — this is the reality VFX faces in California. VFX was once a growth industry creating the future of Hollywood films — everyone flocked to California. Now in the 35 or so years since Star Wars changed VFX as a filmmaking tool, people are migrating to subsidy driven economic zones, as they are literally awash with abundant Hollywood content, innovation, and work that California usually claims.

In an almost direct reversal of the post-Jurrasic Park period (where VFX grew into an industry), people are flocking to other states and countries for VFX. Their economies are booming, and the pixel monkey has packed the airplane baggage for greener pastures. Migration from other countries also pours into these tax havens, but no citizens of those countries do anything to stop the influx of people. They just plan to no longer need them by developing local talent from their training. It is a bad Hollywood sequel.

Looking around there are still green lawns. Those may disappear altogether if the drought continues. For those who control the water, the drought is not affecting them — until they find they can no longer import water.

*an earlier editorial mistake had this labeled as part 3 of the series.