We all love high end Visual Effects, but anyone who loves them as much as those who do it for a career, sometimes enjoy the simplicity of doing things the film school/garage band way. As kids we devoured Cinemagic, and Cinefex magazines, and hand back-wound super-8 mm cartridges, to try and do visual effects like the pros.  That was how the pros did them.  Even Ridley Scott pointed out at the Visual Effects Society Awards in 2016, that ALIEN was made with models, paintings, and white paint flecked on a black board. Now with computers being the main force behind the craft, formerly professional techniques are now basically toys.

I know many of the people that did the fantastic work on Star Wars: The Force Awakens, and really enjoy it. One of the most impactful scenes is the battle in the derelict Star Destroyer. Fantastic lighting, dynamic action, and fun!  In a short break from all of the long days making VFX on the computer, I took 45 minutes to have some fun with VFX and pay a slight homage to that scene in a low tech way.  Armed with a toy, toothpicks, tape, and wire — This is the result:

The Making of the AG_TieFighter

This entire image is shot in-camera on an iPhone5, and is a simple a setup as one might imagine. Despite that, it is a good example of basic old-school practical techniques, including a Peppers ghost composite.

An off-the shelf Star Wars toy (I got for Christmas), approximately 3 inches across, sits on a display stand in front of a photo from The Art of Return of the Jedi book — a shot of the interior of the second Death Star model. The toy sits on its stand, and I figured the complexity of the background would help hide the clearly visible display stand (ironically borrowed from the Millennium Falcon toy it sits next to). It helps that the scene has complex lighting as well.

A little black tape to cover the obvious Star Wars logo, and here is the basic scene: 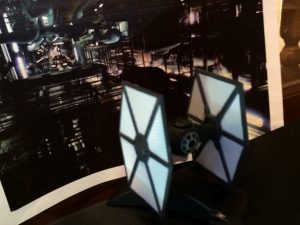 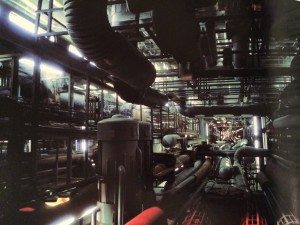 The original idea to add the laser bolts was simply to put green tape on toothpicks, and mount them on a thin wire in front of the craft, like a diorama. I thought it might be easier to control the lighting on that element, if they were taped to a small plexiglass frame I built some years ago to shoot blood drip elements (for JJ Abrams FRINGE). As the setup came together, the idea of using the plexiglass surface as a simple mirror, and compositing the lasers seemed better.

A small bit of wire sufficiently suspended the toothpicks in front of the glass, outside the view of the camera (what’s outside the frame is masking tape after all). The wire was adjusted until the images aligned properly, and the whole setup illuminated with two flashlights, being careful to keep the light off the glass, and off the wire – which was not black, as I was winging the setup. 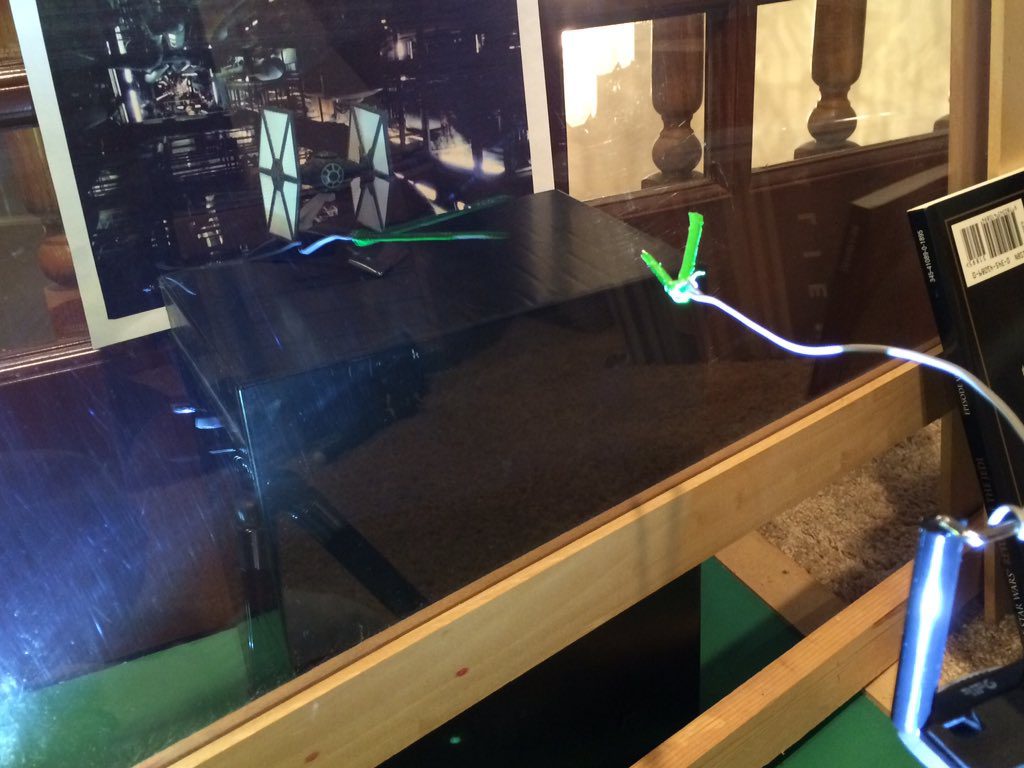 Here is the first test image: 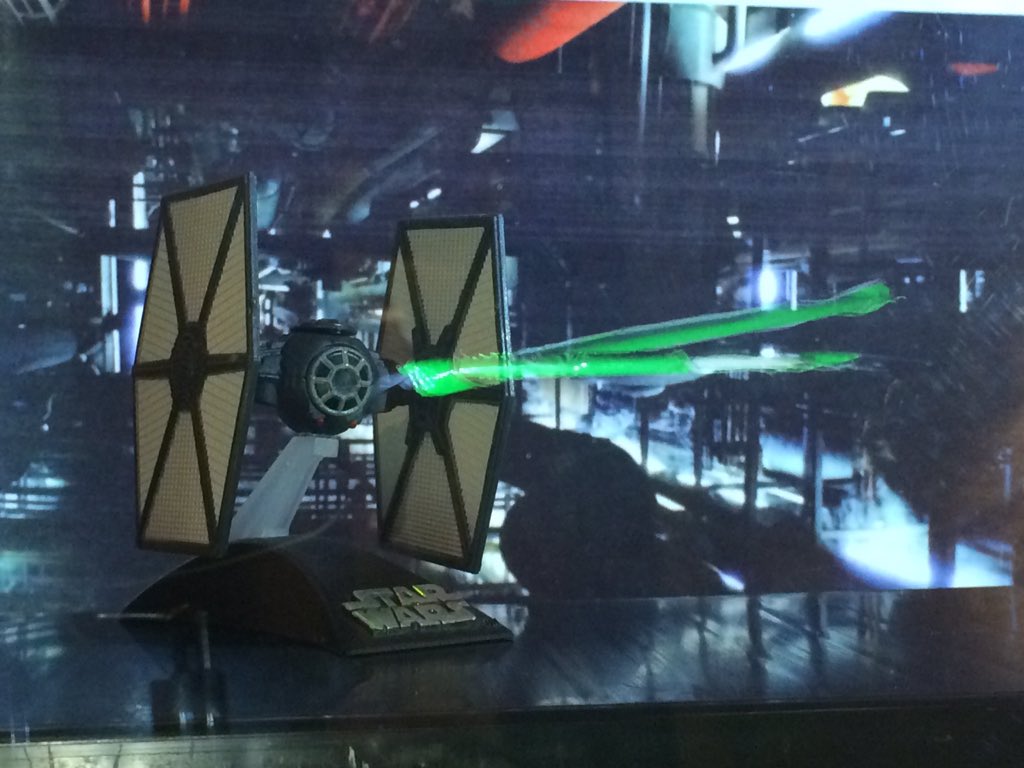 This clearly looks like a toy on a box, but the lasers are compositing nicely, and since the glass reflects on both outer, and inner surfaces, the doubled-up imagery serves to soften the bolts. It needs better lighting.

With a little adjustment, and some judicious cropping, the scene is starting to take shape. You can see the slightly green reflection of the toothpick laser bolts that have no light on them. Turning on the flashlight to illuminate them, and flagging off some of the light to keep it off the glass and wire, and you have this result:

If you look at it too long, it starts to fall apart as a believable scene, but at first glance the image sells.  In the days of the original Star Wars, fast paced editing fed us a succession of short shots, with errors as obvious as these in them. With no time to identify the artifact, a visual narrative was constructed before our eyes. There were no DVDs, or quicktime movies to step through, and tear apart — it was only intended to be seen once, and to leave an impression.

As a frame of reference, here is the beautiful work of my friends in Star Wars: the Force Awakens, that inspired a few moments of Visual Effects play. I love the interactive light from the lasers that contaminates the whole dusty environment. That’s something we have never seen in this context of Star Wars before (yes in the prequels, but this is a real TIE fighter), and is perfectly executed.

So whether you are a hobbyist, or VFX pro, remember the buddhist saying, that made its way to the Star Trek Episode Shore Leave: “The more complex the mind, the greater the need for the simplicity of play.”