Splitting Up to Carry On. 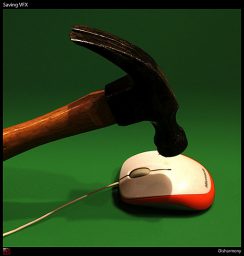 Government kickbacks are not the only concern weighing on the VFX industry. We have innovated our way into solving everyone else’s problems, taking on the burden that used to belong to other departments. VFX have threatened the jobs of other parts of the industry for several years, and these industries have downsized or specialized as a result. Now VFX is at times overburdened with responsibility for the camera, sets, props, hair and makeup, and even actors in a movie — just fix it in post. We have always said we CAN do it, but due to global pressures we are undercutting our costs for our added responsibility and running from kickback zone to kickback zone to survive. The practical side resents us, and we are inadvertently being punished for giving greater control to film makers. Um, you are welcome? The discussion of trade associations and unions continues to help the struggling VFX artist, but the prevailing fear that if we organize, they will find other sources around the world remains — because the studios have already shown that they can. Oddly enough, the very departments and associations we have downsized by being successful, may be the thing that saves us from our own short sightedness. VFX artists are doing digitally what  other departments do practically, but different toolsets aside, the task is the same.  Whether you are pushing wire, wood, paper, paint and glue, or moving a light or camera; there is a doppleganger in the digital world doing the same thing.   However the practical side of the business (what we used to just call filmmaking) organized to protect themselves from unfair trade practices a long time ago.  It is rare to  outsource a cinematographer, or lighting department due to negotiated contracts that have existed with the studios for years.

The practical advice to those who do practical things has been to pick up a computer to survive. The problem is that we have been defining the job by the tool since the advent of digital, instead of by the skill set required.  Talent knows little bounds based on tools.  Does anyone doubt that Michelangelo would have been a wizard with a mouse? Thus existing practical departments are evolving into the digital skill set, but VFX needs their expertise, reference to the real world, experience, and standard contracts.  Instead of controversy when a cinematographer wins an award for a mostly digital film, it should be their responsibility throughout the film anyway.  Most cinematographers do not push a camera but direct the team who does, so they do not need to push a button on a workstation either, as their creative direction with the artist who does so is similar. A Tool Does Not Define Talent. As computers simulate more things, like clothing, hair, explosions and light, they start facing the same problems that practical people do.  Cloth hangs under gravity, hair tangles, and fire goes where it wants.  The methods to solve the problem are similar, and the methodology is often transferrable.  Yet in this giant movie set we call reality, there is no way to overcome some of those physical limitations, and this is where digital comes in.  VFX movies are now using digital greens departments, and often those teams are populated with people who may have spent most of their life not looking at trees, and do all research on the internet.  Their reference to reality is the last movie they saw, and the practical experience with the outside is missing.

It seems like lifting the extra burden laden on the back of VFX to its original authors might provide the practical side with the new toolset they must grow into, along with the artists who know that tool, and provide the critical eye of a known craft, and protection the VFX artists are starting to clamor for. The truth is, it is already happening to a small degree while VFX tries to entrench itself, and bits of the toolset VFX artisans created have already been carved away and lost to them.  Previsualization is easily now part of the art department, and is used more by directors to figure out what needs to be done before the film is made. Similarly the innovation of digital intermediate created by visual effects companies was taken back by the lab who used to have sole control of color.  The final departments talking with the director, and easily the one with the most face time is editorial and color. They look at the shots, change the color in power windows to the discontent of VFX artists daily, and influence the creative decisions directly.  The talented in this field command higher salaries, and they have that control one more time, along with the eye and ear of the director.  Previs and D.I. were once the wonderstuff from the VFX crews, and now VFX is a slave to their requirements because they did not hold on to the technology.  Inaction will result in more of this technology moving into the hands of others, so why not take action and do it on purpose? Camera should be part of the camera department all the way into post.  Costume departments should supervise digital cloth, makeup artists should employ both practical and digital tools, and matte painters should be working with the scenic and art departments directly — since they used to anyway.  Movie sets are sets, who cares if they are wood or pixels?  Andy Serkis should be recognized with his lead digital artists as a group — since he did not create all the amazing characters alone.

Those VFX artists out in the community calling for organized labor, or fair trade practices against the subsidy tidal wave can rest assured that there is a union waiting for them there.  The challenge is convincing this existing power structure that you are not a threat to their membership, but actually share common cause, and that all of you can work together.  Which is why they think they formed their organizations to begin with.  It is likely a shorter journey than building this structure from scratch.  This will also likely work better than throwing all VFX artists into a common pool, as their is already specialization in skill sets that lines up with the practical side.  (Just consider when all the roto artists stage a walkout, though — then we will see whose the most important in a  3D conversion.) If all the additional tasks digital artists now do flow back into the departments that originated them, and those digital artists embraced as co-creators, maybe visual effects can focus on those things that only they can do, and become special effects again. Besides, they are going to split us up anyway.