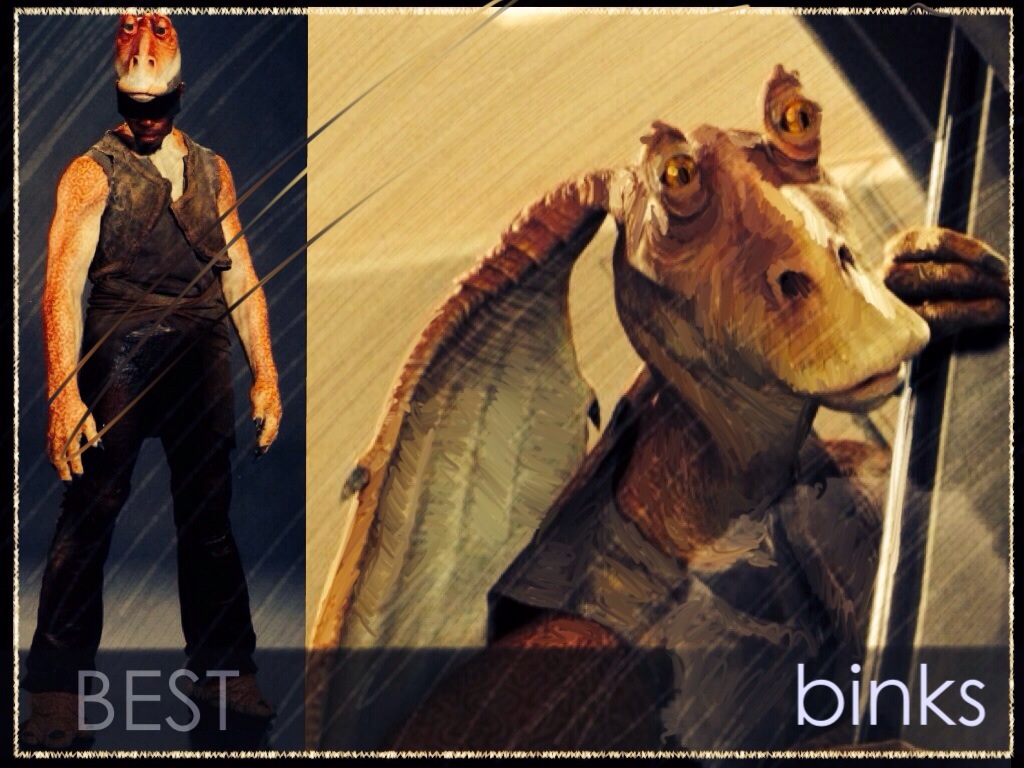 Focusing the Hatred of the Galaxy, a Digital Star is Born!

There are long diatribes on the Internet tearing George Lucas to shreds for the creation of Jar Jar Binks.  Such vile hatred for a character in a movie —an individual that does not exist — is curious.  Normally this level of vitriol is reserved for politicians and rapscallions (though the character was a politician in Episode II and III).  Fans of Star Wars despise this creation, and make it their hobby to eviscerate him.

As I said:  Curious.

It seems easy to overlook all the good that Mr. Binks is.  Jar Jar is the first fully realized and successful digital actor in a motion picture.  This statement is not an attempt to draw the Ire of fans who are not fans (so please do not start), nor is it necessarily a unique observation.  It is the attempt to speak of the achievement of Jar Jar Binks in The Phantom Menace, show his benefit to our craft, and to the film as a whole.  Please consider the opinion ahead, and save your hatred for the next Comicon panel.  Some people worked very hard over several years, and their fine work deserves pointing out.

We all remember the first pass at CGI Jabba the Hutt. The Doe-eyed CGI insert into the 1977 original movie of this character was a far cry from the original puppet on the set of Return of the Jedi in 1983.

It was sufficient for its time in 1997, and finally completed the wish of George Lucas from 20 years earlier for a repartee with Han Solo and Jabba — one that he could not afford at the time (the Secret History of Star Wars has a great description of even earlier attempts to replace Jabba) — but it was not fully convincing, and does not stand the test of later examination. Star Wars characters do allow for a little bit of muppet-like design, since many originated that way, but there remained a sense of un-reality to the character. Jabba and other characters in the special edition were what stood out the most, at times their design did not seem functionally accurate, or the movement somehow lost weight. The creatures added to the special editions were also plagued by the same troubles that haunted the digital character work in the movie Jumanji* — the most egregious being that of flashed black levels in most of the CGI elements.

Remember, photorealistic Computer Generated Imagery was barely a decade or so old at this point.  Were this level of sophistication compared to a car, Jabba was a roadster, and not up to speed.  Lucas himself (an ardent lover of fast cars) felt the character could use more improvement, as he had the CGI version of Jabba the Hutt replaced, in yet another of his special editions.  This video of the making of Jabba the Hutt, produces a few winces, when you compare the tools of the day, which tilted the scale away from the goal.

CGI animated characters were the holy grail of the 1990’s.  It was the equivalent of going to the moon, just 10 years after orbiting John Glenn.  The success of Jurassic Park proved it could be done, but it was not a success that was easily repeatable — and the emotional content of each creation onscreen began and ended with a roar. Animators and Technical Directors throughout the industry sought to improve the quality with each and every opportunity, as they moved their craft from a technical profession to an artistic one. ILM continued to dominate the field (Dragonheart, Casper, Men in Black), and since CGI was such a young and developing art form, everyone else was trying to catch up to their level of expertise.

A prime example of less successful, though technically adept results is the Blarp in the 1996 version of Lost in Space. Despite its technical achievement, Blarp did not enter our minds as a fully realized character, and we were left missing the monkey from the original series. Much like other films with CGI creatures at the time, there were great CGI monsters, but very few of them went toe-to-toe with academy award winning actors, and completely suspended our disbelief. Maybe for a few seconds of screen time, but not to the level everyone was shooting for.  Thus was the sad tale of Blarp.

The state of the industry on digital actors in 1995, is well detailed in this article from Wired Magazine, featuring the work of ILM, and the research of Scott Billups (attempting to create a digital Marilyn Monroe.)  There is a larger attempt in this period to sample from reality by scanning more people in 3D, but reality is more than skin deep.   Kevin Mack of Digital Domain started research on digital muscles as well, something we all rely on now, but it was a research project at this time.  Thus better rendering, more complex models, subsurface scattering, better hair simulation were proposed — the industry was mired in technical details, trying to fill in the uncanny valley for human characters.  Trying to make any character reasonably believable at this time was a daunting challenge.

Enough of the overall industry, let’s get back to Jabba the Hutt. With the success of the special editions, rightly or wrongly, Lucas felt the technology for characters like Jabba was good enough to continue the Star Wars saga. Ever the visionary, George looked past the technical issues, and pushed his teams to reach the next level of achievement. He set out a daunting task: it is 1997 and he asks ILM to make a fully animated, talking, acting creature that reads as real personality across from Academy Award winning actors.  You have two years, and another 1600 shots to do at the same time.  Of course you have some dinosaurs under your belt, a talking dragon, a crazy guy in a green mask, and a cartoon ghost or two — but there will also be a giant crowd of these characters at the end for the big battle. This wasn’t one or two shots with a computer generated gangster slug, it was time for the “moon shot” of character work.

So how did ILM do?

You hated Jar Jar Binks, but not because he looked fake. He was the annoying kid next door, the wimpy heroine from Indiana Jones and the Temple of Doom, Buster Keaton, and a crazed (supposedly) Caribbean stereotype who talked too much. He was a brilliant achievement! As a matter of fact, not even ILM thought it was possible, and planned to do a physical body with nothing more than a head replacement at first (Ahmed Best was on-set for The Phantom Menace, and provided critical lighting and performance reference). Yet they realized the amount of work matching a CGI body part to reality was just as daunting, and they took the leap of faith.  They did everything necessary to populate The Phantom Menace with an annoying chatterbox. Jar Jar is an acting character, not a cold CGI automaton.  You may hate who he is, and choose post- Gollum to criticize the VFX work, but he is a singular achievement until Lord of the Rings — and he received no love for it.

“It was the first time I could get an alien to turn in a really great performance,” says Lucas. “When we did the dinosaurs in Jurassic Park, that was when I realized that we had finally developed the ability to do a photorealistic animated character that is believable. I was able to do it with Yoda, but Jar Jar could actually move around and walk with the characters and do physical humor.”

The aforementioned Scott Billups even shares the general feeling of the time about Jar Jar Binks in an article from 2004 about digital actors  “I remember the first time that Jar Jar went in for a close-up – the chatter for months was about how banal his lines were and how annoying he was to watch. These are attributes we bestow on flesh-&-blood. I never heard anyone say that the motion didn’t look realistic.”

His onscreen visual was only one of the ways The Phantom Menace changed the visual effects landscape.  Jar Jar existed in convincing outdoor lighting, with cloth simulated ears, fabulous lip-sync, and tight interaction with environments.  Except for the jaded among the group that are reading this, no one stood up in the theater and yelled out “FAKE!”  We were convinced, and annoyed by him, and many failed to recognize the first photographically real digital actor, and gave all that praise to Gollum in Lord of the Rings.

Congratulations on the stellar achievement Jar Jar is.  You may stop hanging your heads in shame.

Mr. Binks primary role was to fulfill the story requirement to move from one situation or another, and provide a grand army for our heroes.  He also took on the role of Buster Keaton, sometimes directly, as comic relief.  I would also count that he was a distraction to Anakin Skywalker’s wooden performance.  In a mostly greenscreen room with a director not known for directing children, Jake LLoyd probably found himself a bit lost.  (It is not nice to pick on a kid) He did not deliver as convincing a performance as one would like — but the die, or rather chance cube, was cast.

If you analyze the film, Jar Jar is most annoying during scenes with Anakin Skywalker.  It seems Lucas may have used him to distract the audience from the situation he found himself in — with a young boy who could not interpret “Faster, more intense,” with any clarity.  Was that the best decision?  Millions of dollars in profits argues against the answer you just voiced in your head, but like it or not Jar Jar allowed us to accept Anakin SkyKid by keeping our minds off of him.

Phantom Menace had more groundbreaking visual effects than The Matrix did, but lost the Academy Awards due to story content, and lack of the one cool signature shot.  Do not give it such short shrift in that category.  No one had ever done a 2000 shot VFX show before, and with an animated lead character to boot.  After all, it was Star Wars, and it had to be big.

It is almost fourteen years later, and Jar Jar remains part of our common culture.  He appears in Robot Chicken, people still say “okee-Day!” He is also frozen in carbonite on a Disney ride — assuring a much greater number of people will see him.

Like him or not, Jar Jar was the grandfather to Gollum, Davey Jones, Dobby, Smaug, and The Hulk.  Without him those characters would have been delayed, and we would have fewer things to poke fun at.  Digital actors owe their life to Jar Jar Binks.  Give the annoying CGI version of Willie Scott (Indiana Jones and the Temple of Doom) a break.

*  VFXHQ is on record in 1996 for the movie Twister saying: “The now famous ‘JUMANJI-problem’ (a lack of contrast in composited 3D animation elements) seems to be a thing of the past for ILM.”   A few years early, it seems. ;)  (The helmer of the VFHQ is now an award winning compositor at ILM, and a good friend).