It is about time we closed this saga. This will require a recap: [part1][part2]

In 2014 I saw an image that I’d never seen before, of the Millennium Falcon design, as it evolved from the Blockade Runner concept.  For those of you unfamiliar with Star Wars design history, The original design of the Millennium Falcon by Colin Cantwell, was improved by Joe Johnston. Later someone mentioned to George Lucas, that it resembled the Eagle spacecraft from the television series Space 1999. That initiated another emergency redesign of the Falcon — in which the old ship became the Rebel Blockade Runner so as not to waste the expensive model. 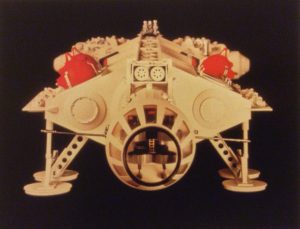 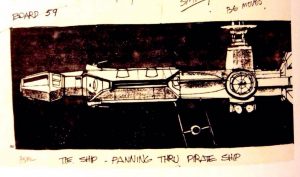 There are several extant versions of the accepted story of the redesign.  Two of them revolve around the idea of a hamburger, or pork burger with a bite taken out of it, and someone (with their mouth full) declaring “This, but with an olive on the side for a cockpit.”  The complete truth of those stories is still debated.

Joe Johnston said years ago that he did several drawings of the Falcon with a centered cockpit— but no one had ever seen them in all the making of Star Wars books and documentaries. That is, until I saw it in a collection of photos from an archivist in the motion picture community.

It was an image that could not be show publicly, due to concerns with the original owners (I have some memory that it was a photo set from the late Grant McCune).  I hurriedly rushed home, and cobbled together other Joe Johnston drawings with a few lines that I remembered seeing in the photo, and I wrote a #VFXarchaeology article, mentioning that design is out there, and we should look for it. 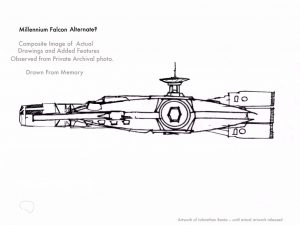 “This is not from Star Wars.”

In a discussion with Joe Johnston on social media, he said “This is not from Star Wars.”

The drawing I had presented is not from Star Wars, it is my compilation from memory, but the design did exist somewhere, and it was the only clue I could share.  Other like-minded individuals took up the search with me, but could only find hints of that design, until the Art Of SOLO: A Star Wars Story came out, which included the exact photo I saw in 2014.  A later digital compilation revealed even more of the image, but no one could identify the artist definitively. Given Joe’s denial of the earlier thread, in contrast with his recollection of sketches confused the issue a bit. 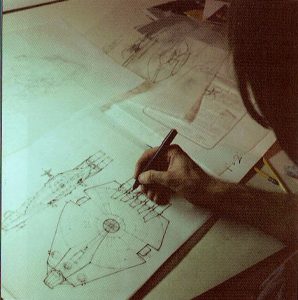 The online community picked up on the article, and debated with photos of Johnston, Paul Huston, Steve Gawley, and Ralph McQuarrie at their drawing tables to verify who was actually designing it.  The community was leaning toward Ralph McQuarrie as the designer [link], based on the hands, but the hair strand left a question. No one could verify who did the drawing.

Will The Maestro Please Stand Up?

Joe Johnston is the artist, as this dirty photo taken from another set of negatives shows — scanned with an iphone by the archivist who had shown the first image to me in 2014.

Recently, Joe Johnston appeared on a panel for Star Wars Celebration 2022, and shared yet another version of the creation story, which clearly references this design:

“I was feeling a little bit of pressure, and I went home and was sitting there at two in the morning … and I’m looking in the kitchen and there was a stack of dishes that seemed to have always been there,” Johnston said during today’s the Light & Magic panel at Star Wars Celebration in Anaheim, attended by SYFY WIRE. “And I was thinking, if you took a plate here and put another exactly like it on top, that’s sort of like a flying saucer. But if you put engines in the back, that implies it’s going to go that way and if you put a cockpit in front, well that gives it a nose.” 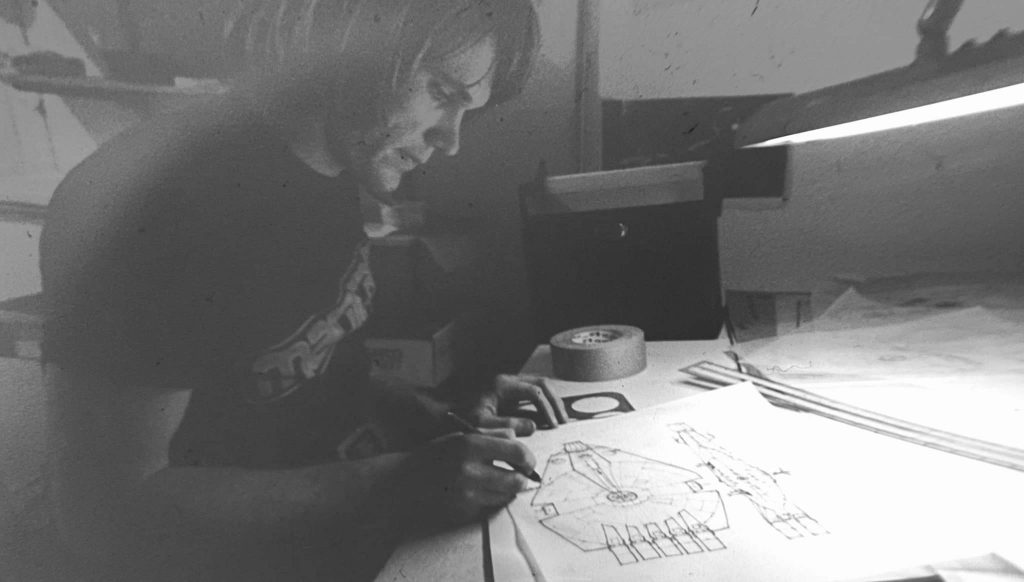 Credit Where It is Due

Despite one more version of the Millennium Falcon redesign — honestly it was a really long time ago to remember all the details — it is always a treat to see the images from so long ago, that were buried in archives.  We are just lucky that anyone had presence of mind to photograph so many behind-the-scenes photos for a movie that was supposed to be a low budget B-movie by George Lucas. It does make you wonder what else is buried in that Star Wars vault?

But as to the credit for the design of the Millennium Falcon?

Joe Johnston put it so nicely at Star Was Celebration in 2022:

“I knew I was never going to be able to render an image the way Ralph did. We recognized that we had this relationship that could feed off each other,  He would always let me have the final word on what the design was … but he would take my designs, sketch them up, and send them back to me, and I would change them.  It was a really symbiotic relationship. we’d start to feed off each other’s ideas. I’ve never worked with anyone else the same way, and I doubt I ever will.”

As with most film design work, it was a collaboration. Brilliant work by both men, and all the other artists.  George Lucas invited the best ideas from everyone. This design did not make the cut, but it is still fascinating.

THAT is Star Wars.