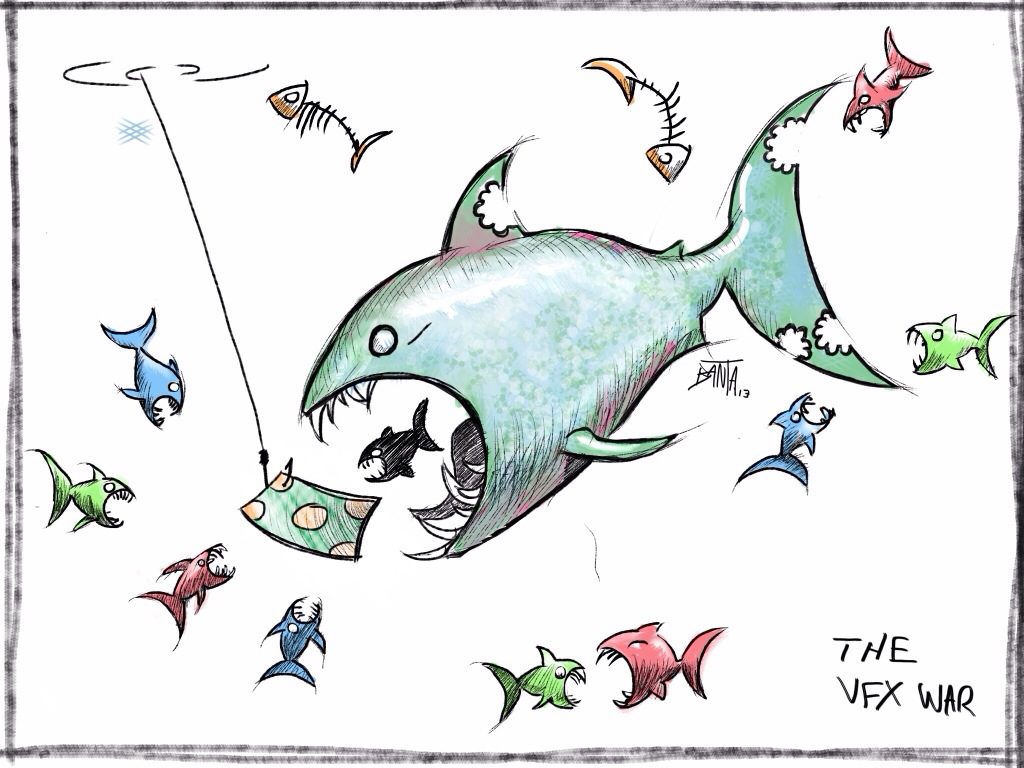 We Are Eating Ourselves.

It’s almost as if someone planned it. A Macivelian overlord sat down one day, scheming how to drive down prices, institute near slave-driven hours (without compensation as often as possible) by arbitrarily putting a date on a calendar, increase their profits, pay for no benefits, accept government kickbacks and free labor. However no such overlord exists, and we have done much of this to ourselves.

We have no industry standard bidding contracts, and we constantly undermine each other to stay afloat. It is not with malice, but on the base instinct of survival that we under-bid each other. Yes, there are innovative companies who design better ways of doing things, individuals with the latest cost saving measure, and legitimate competition. Death is a natural part of life, and sometimes companies just fail. However the barrel is getting full, and the food flakes are not multiplying — to get work we scrape at the bottom, and work at less than cost. In the process of competition, others start buying the work. Soon the bones of companies once the envy of the world float by, as we congratulate ourselves for removing one more leg from the stool on which we sit.

It is starting in Vancouver. It will happen in London. Will Detroit in its near apocalyptic financial failure finally underbid India?

It might be hard to believe, but maybe there are too many fish in the VFX barrel, and supply and demand is now meeting up with survival of the fittest. Financially over-extended companies die all the time, and it is just natural as the “food source” is limited. But with more and more production relying on the tools of visual effects, how is this possible?

George Lucas was one of the innovators who successfully created VFX for hire. Peter Jackson too, and currently the shops they spawned dominate the VFX landscape. However both of those shops are tied directly to content. They are necessary filmmaking tools for their creators. These days ILM is owned by a studio, but is still supported by a content creator. They also can do pretty much anything under the sun with their level of technology and artist pool. In many ways, with virtual sets, digital makeup, digital pyrotechnics, digital wardrobe, and digital actors they are the studios from the golden age of film — the backlot is now on an iPad. Under these circumstances, these two are metaphorically the biggest, strongest fish. They will get more food. They are the prize winning fish of their owners.

Government Will Not Save Us.

Recently the number of government kickbacks (Webster defines: a return of a part of a sum received often because of confidential agreement or coercion) around the world for production companies have artificially twisted the VFX market. Governments make fish hatcheries to protect “endangered” species, and increase their population,  but in this case it is doing the opposite. VFX hatcheries are being supported in areas where the “fish” did not naturally aggregate. Once the population is filled to maximum, the Government removes its protected agreements. Artists are often forced to migrate or suffer in-place, and the number of fish has multiplied pasts its potential food source.

Only the fish get hurt. There is no ideal place for VFX to exist, and therefore flourish. It should be a natural outcome of the ebb and flow of the industry. I can only hope that England and Canada survive once the Government money dries up — I have many friends there and they do amazing work.

The call for Governments to protect the VFX industry is only useful if the Governments actually see that there is an economic war going on, potentially in violation of international trade agreements. Currently VFX artists worldwide are engaging law firms to peruse these agreements, and seek recourse. This is what a Government should be doing — protecting its citizens.

Continuing the analogy, there are now several areas of the fish barrel cordoned off with more food poured in one chamber over another. The fish who can jump over the barrier survive. Once inside they eat each other when the food becomes scarce. Many suggest that we as fish congregate into one aggregate school, and refuse to eat. In that case we have to rely on the good graces of those with the food to want to save the prize fish by feeding all of us. I fear they intend to let us eat each other.

The number of VFX companies outweighs the demand in some sectors. Only the strong can survive, either financially, technically, or artistically in the long run. The standard VFX model is broken, and those who figure out the future model first will stay around. Do you open a new VFX shop in L.A., or Japan? Why not? It may just be the wave of the future, if you are strong enough.

Evolve or die is a common phrase that applies here. We need some fish who can walk.